Cannabinoids aren’t the only compounds in cannabis flowers, but they are the most significant. True, terpenes play a crucial role in weed, but you could find these aromatic compounds in many fruits and spices. To date, we don’t know of any other plant that has such high concentrations of phytocannabinoids.

Considering how influential cannabinoids are, it makes sense weed companies release cannabinoid lists with each of their products. Although it may seem tedious to scan these labels, cannabinoid lists could give users a feel for their cannabis flowers.

Each customer has a unique THC tolerance, so there’s no standard level where THC transforms from “mild” to “potent.” However, most cannabis flowers with THC above 20 percent are considered “high-potency.” Impressively, a few cannabis concentrates could have ~ 100 percent THC, but most will have THC in the 60 – 80 percent range.

Although THC levels give customers a glimpse into a strain’s potency, it’s not the only determining factor.

For instance, many cannabis fans believe strains with CBN have a different “vibe” than THC buds. Although data is still limited, some people claim CBN has relaxing properties. Therefore, strains with extra CBN are often associated with “couchlock sessions.”

But it’s not just expected effects that make cannabinoid lists useful. Indeed, many MMJ patients rely on cannabinoid lists to find strains that match their preferences. For instance, if a patient depends on CBG, CBD, or CBC, they’ll need to see these cannabinoids are well-represented in their strain. 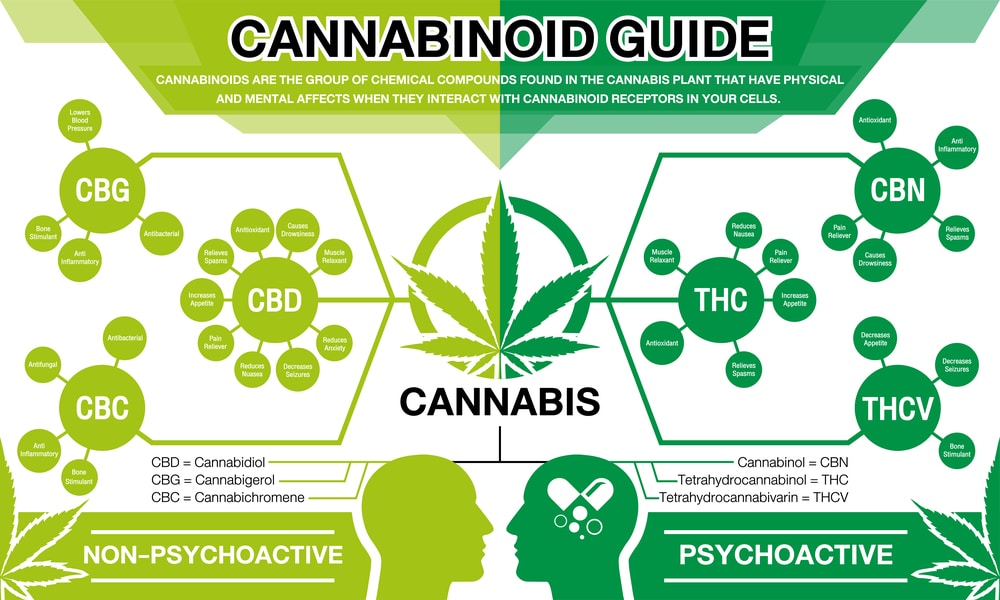 Are There Any Cannabinoid Interactions Worth Noting?

Aside from isolate powders, cannabinoids aren’t “sold separately.” Indeed, most cannabis products contain a broad array of cannabinoids from well-cured cannabis buds. Interestingly, the ratios of cannabinoids in your final product could significantly affect your product’s effects.

For instance, scientists now know that CBD blocks THC from landing on cannabinoid receptors. Therefore, even if a strain has a relatively high THC percentage, it could be dampened with a higher-than-average CBD rate.

There’s also preliminary research into the interactions between CBD and CBG. According to recent trials, strains with similar concentrations of CBD and CBG may increase nausea. By contrast, when patients take CBD or CBG on their own, they tend to have antiemetic properties.

Unfortunately, the science of cannabinoid interactions is incredibly complex. Since cannabis has dozens of unique cannabinoids—many of which have yet to be discovered—it can be tricky to figure out how they will interact with each other.

However, as more scientists get interested in the “entourage effect,” it’s likely we’ll have a better understanding of how to mix cannabinoids for optimal benefits. As medical marijuana becomes mainstream, researchers need to know how unique cannabinoid percentages affect different conditions. Cannabinoid lists will likely play an influential role in the future use of medical and recreational marijuana.